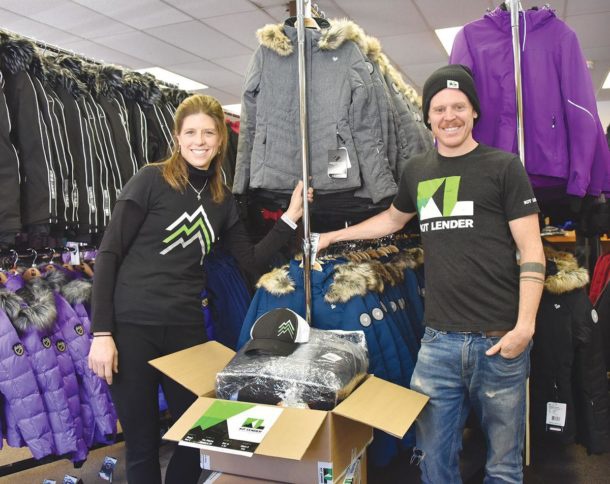 This article by Tommy Gardner was published by the Stowe Reporter on Dec. 5.

But he said the exposure has helped make an already busy holiday season even busier.

Kit Lender rents ski and snowboard clothing to people who don’t do either frequently enough to buy their own gear, shipping it in boxes to the customer’s hotel or ski resort destination, and providing return instructions.

Shinners told the “Shark Tank” investors — Sunday’s episode featured Mark Cuban, Barbara Corcoran, Kevin “Mr. Wonderful” O’Leary, Lori Grenier and Robert Herjavec — that Kit Lender, which he started in his apartment almost five years ago, had $755,000 in sales last year, with $106,000 earnings for the company. Those figures brought a “wow” of approval from Cuban.

Shinners asked the sharks for a $200,000 investment in exchange for a 7% stake in Kit Lender, but, one by one, they politely declined. Whether from the editing or the actual pitch, it seemed as if Herjavec was close to investing, but ultimately, he was with the other sharks: They thought it would cost too much to make the leap to become a big company by itself.

O’Leary suggested Kit Lender partner with the “two players that know where 80 percent of the customers are,” likely a reference to Vail and Alterra, which have been gobbling up ski resorts, including Stowe Mountain Resort, in the past few years. He suggested he do it soon, too, before someone else sees “how good of an idea this is.”

“Someone else is going to think big. It should be you,” O’Leary said.

Shinners turned on the charm with Herjavec, telling him “the table is all set” with the company, and suggesting with a grin the two could go riding together on their Italian motorcycles.

“I have worked on this so hard, and I’m ready to take it to the next level,” he said.

Shinners said this week that the crew put a lot of work into preparing for a Shark Tank bump, which they did get, and it came after pretty hefty Thanksgiving, Black Friday and Small Business Saturday boosts.

“It was very manageable,” he said. “Everything went very smoothly.”

According to Shinners, the website “tached out” at 25,000 concurrent uses, and has stayed high since.

“Shark Tank” made things a lot more hectic in other ways, namely Shinners’ social life. He said he’s received so many emails, texts, phone calls and Instagram messages that he joked he might need to hire someone to respond to all of them. He likes to respond to everyone who takes the time to reach out to him and the company.

Some of the support has come from the recovery population, after Shinners told the sharks that, shortly after launching the company in 2015, he was going back and forth constantly between New York City and Stowe, and selling out of product regularly.

“That’s when I pretty realized I had a pretty unhealthy relationship with alcohol,” he said, tearing up as he told the sharks, and about 5 million people. “So, I quit drinking and focused on this business.”

Shinners said he has now been sober for four years and quit his day job at a New York investment firm this year to concentrate full-time on Kit Lender.

Now, after the Shark Tank episode, not only is business booming for Kit Lender, but the world is coming out to support Shinners.